I teach English to law students at Potsdam University in Germany. For the past three semesters this has meant teaching online using Moodle and Zoom. That online language teaching has its downsides are undeniable. They have been well documented and discussed. As undeniable is that online platforms open up opportunities for teaching and student interaction that are not usually found in the language classroom. I wanted to make the most of one such opportunity.

A Law Jaw session simply brings together two classes of law students with different first languages to talk about law-related and some non law-related topics. Of course, the students don’t necessarily need to be law students, but having a common interest certainly helps. The other thing that the students share is that they depend on English as a language of communication as they do not all share another common language. Many students have missed the chance to have conversations with new people in English over the past months due to restrictions on travel. From the questionnaires completed before the class it seemed that none of the students had taken part in this type of exchange before.

From a personal point of view as a teacher, working on this project gave me the opportunity to collaborate with teachers who I wouldn’t normally have contact with. I took part in an online Global Gathering meeting organised by the Legal Writing Institute and met two law professors, Clayton Steele from Brooklyn Law School and Chantal Morton from Melbourne Law School. It was through the important conversations with these professors that the Law Jaw developed from a basic idea into a session that can engage large groups of students from different legal and educational backgrounds for ninety minutes.

The session gives students the chance to practise using English in an authentic situation in which they can specifically discuss legal concepts and situations. More than this, they get to know and network with international counterparts in a low-pressure social atmosphere and gain insights into one another’s legal systems and cultures.

The idea of bringing two groups together is reasonably simple, but detailed planning is important. The core of the exchange takes place on Zoom. Students are sorted into breakout rooms in which they are provided with questions and topics, which are designed to help them find out more about their counterparts and identify similarities and differences. They take part in three discussions with different people each time. (You can find an example of a schedule here). Students need to be assigned to breakout rooms in advance so that they know where they should be for each round of discussion.

Although the Zoom session is the focus of the exchange, it really begins beforehand. Students are asked to post short profiles on a platform called Padlet. Padlet has the feel of a social media platform in that it allows you to post text contributions with images, videos and links. It’s also possible to comment on and like one another’s contributions. A key difference is that the platform is self-contained and so not viewable to the outside world, without advertising and doesn’t even require an account. By posting profiles and contributions, it was hoped that students would be able to understand a little bit more about their counterparts before the session began. The padlet stays online after the session so that students can continue communicating and stay in contact or swap contact details. 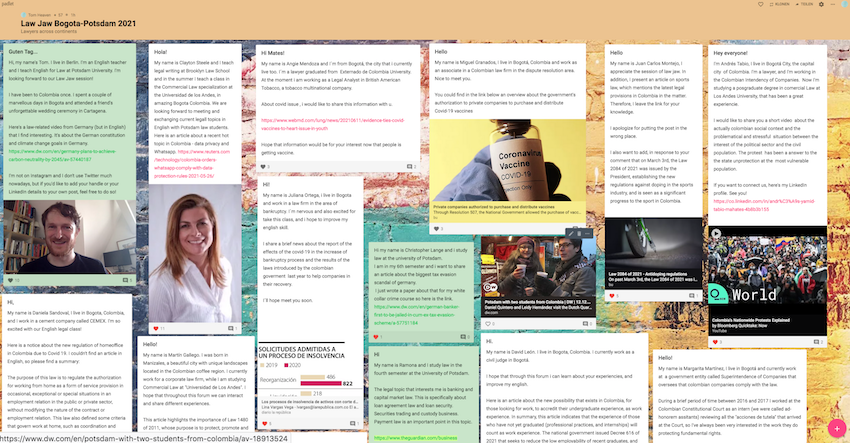 The Potsdam-Bogota Law Jaw, in which 70 students took part, ran (surprisingly) smoothly, no doubt in large part due to the planning that had taken place beforehand. My internet connection cut out just before the session was due to begin but I knew that Clayton, as a co-host, could take over the organisation of the session. Luckily I was able to rejoin after a couple of minutes. The timing of the stages worked quite well. The session did pick up some delays as it went on, but these could be compensated for by cutting into the five minute pauses between the discussions. Clayton and I listened in on the conversations that were taking place and heard discussions of transgender rights in Colombia, the German constitution, the series House of Cards, learning online, Colombia as a fabulous holiday destination and the importance of positive female role models in the legal profession.

The reactions from students in post-session questionnaires has been overwhelmingly positive with all saying that they’d willingly take part in another such session or recommend it to a friend. One criticism was that the discussion sessions were too short, which in a way is a positive sign. Another criticism was that some groups were too large or unevenly balanced between the two groups, which are areas of planning to be worked on.

It would be difficult to make a language exchange like this happen in a classroom. I have run lesson planning sessions in the past for teachers in which small groups communicate via a single online connection, but I can’t imagine it working for such a big group of students. That each student has their own screen and headphones/ speakers actually makes communication a lot easier and focuses students on speaking in English.

Ultimately the success of the Bogota- Potsdam Law Jaw session is testament to the students involved. Without their curiosity and desire to communicate the discussions that made the session would not have taken place. At 6:30 a.m the Colombian students had a particularly early start, but were nevertheless fully engaged in the many conversations. Hopefully, some students might manage to stay in touch and even one day meet in person to continue their conversations, law-related and non law-related. 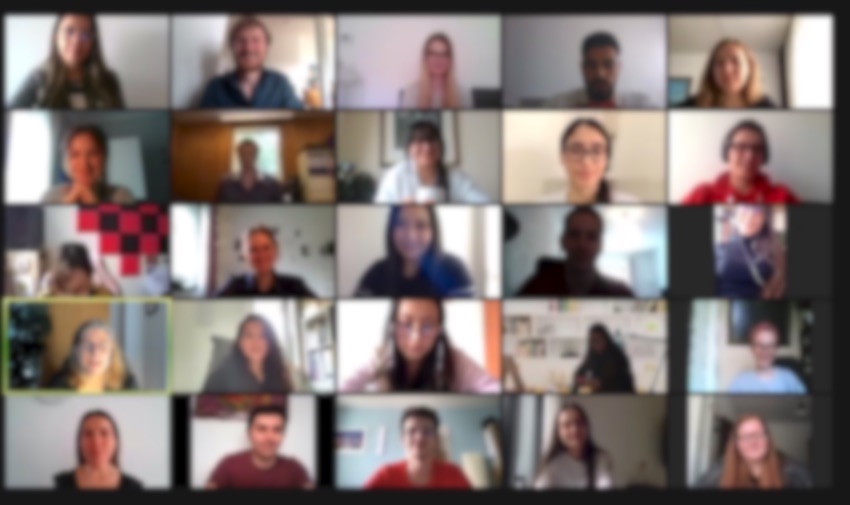 Some of the 70 Bogota- Potsdam Law Jaw attendees